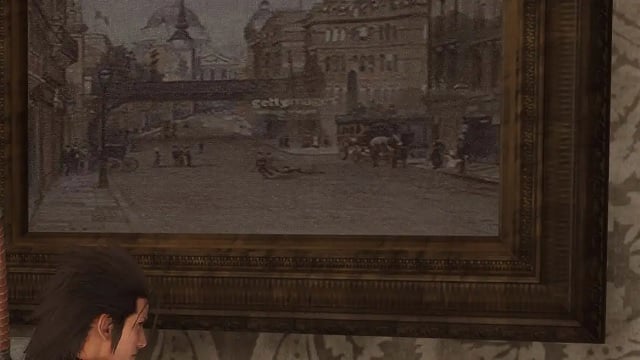 Crisis Core Final Fantasy 7 Reunion launched yesterday to a fairly good reception until eagle-eyed players noticed Square Enix seems to have stolen some of the game’s art from Getty Images. The painting appears in several places in the game complete with a Getty Images watermark, leaving players to call out the developer for stealing assets.

When players reach chapter 8 of the game, part of the story takes place in Shinra Mansion. Like all self-respecting stately homes, the mansion has paintings and other artwork adorning the walls. Unfortunately, one of those is a new addition for the Crisis Core Final Fantasy 7 Reunion HD remaster: a black-and-white image of John Crowther’s “Ludgate Circus, London, 1881” painting that has been stolen straight from Getty Images and comes complete with their watermark, as noticed by Kotaku. The problem is the painting appears in multiple places in the mansion complete with the offending watermark.

This isn’t the first time developers have been caught out doing this either. Capcom found itself in hot water over stolen photos they used in Resident Evil and Devil May Cry, while Activision has been accused multiple times of stealing skins for Call of Duty: Vanguard and Call of Duty: Modern Warfare.