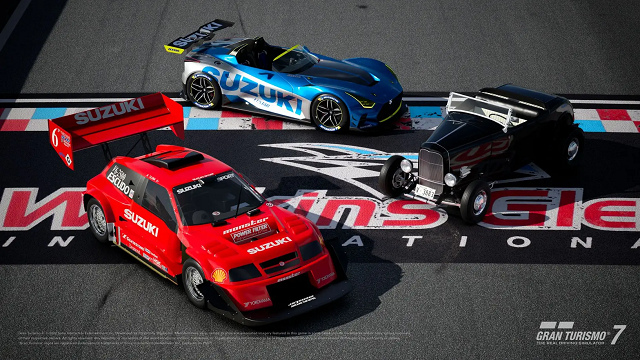 The Gran Turismo 7 Update 1.17 will go live at 11 PM PDT today, June 22. The update will add the Watkins Glen International road course from New York State. Those unfamiliar with the narrow track will find high-speed sections with mid to high-speed corners during the first half of the track, while the second half has tighter, technical turn combinations. The track will have two versions. The long course features a technical section known as “The Boot” while the short course variety will bypass this section.

Three cars will also join the roster. The Suzuki V6 Escudo Pikes Peak Special ’98 makes its first appearance in Gran Turismo in ten years. Intended to compete in hill climbs, the machine is made to compete in the harshest of conditions with a midship 2.5L V6 engine with twin turbochargers. On the other hand, the Suzuki Vision Gran Turismo has been tuned with a front V8 twin-turbo engine and rear-wheel drive to comply with Gr.3 regulations and give peak performance on the road. Completing the trio is the 1932 Ford Roadster, a customized Hot Rod.

Joining the new track and cars is a small update to Gran Turismo Cafe. The Cafe has gotten three extra menus. The Toyota 86 Collection and the Honda Type R Collection both open at Collector Level 20, while the Rotary Engine Collection opens later at Collector Level 32. Full patch notes, including all of the other bug fixes and gameplay improvements, will be released when the patch goes live.

In other news, Square Enix has explained why Final Fantasy XVI will not have an open world. Elsewhere, the PlayStation Store Mid-Year Deals have begun and offer up to 75% off a range of games.