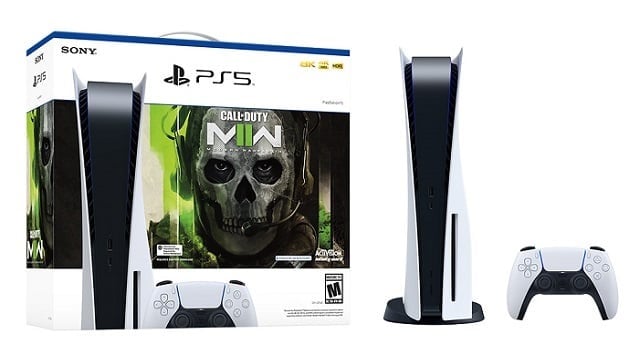 The launch of Call of Duty: Modern Warfare 2 has occupied a lot of gamers for most of today. At the same time, this means the Modern Warfare 2 PS5 Bundle is now available from PlayStation Direct, which includes a disc version of the 1TB PS5 console with Astro’s Playroom already installed and a digital code for MW2.

You can purchase the MW2 PlayStation 5 bundle for $559.99, but due to the ongoing demand for PS5 consoles, there is a limit of one bundle per household. The bundle is exclusive to PlayStation Direct at the moment, unlike previous bundles that have included Horizon Forbidden West or FIFA 23. Admittedly, there’s also nothing to stop other retailers from creating their own bundles by combining standard PS5 consoles with Call of Duty: Modern Warfare 2.

Modern Warfare 2 launched to a mixed reception today following crashes, lagging, and a host of missing content players expected to be in the game, such as hardcore mode and leaderboards. those who do brave the launch issues to grab the game on PS5 (or PS4) will be able to benefit from a host of PlayStation-exclusive features, such as cosmetics, Battle Pass tier skips, and double XP bonuses.