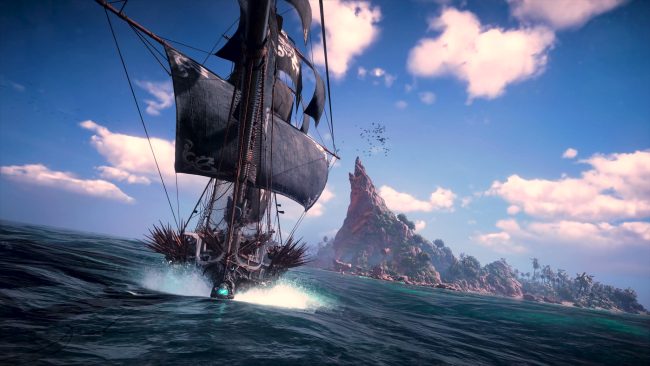 Skull and Bones Update On the Horizon After Gameplay Footage Leaks

Ubisoft is busy scrubbing the footage but you can watch it on ResetEra at the time of this writing.

Skull and Bones is currently undergoing internal playtests and, as usual, the Ubisoft ship has sprung a leak. A six-minute video that serves as an introduction for those taking part in the Skull and Bones technical test was leaked, showing plenty of gameplay footage before it was unceremoniously removed a little while later. However, Ubisoft has told players to “keep your eyes on the horizon” and “stay tuned” for more news soon.

Keep your eyes on the horizon… 🏝️ pic.twitter.com/BWaH9QfYUb

As you can see above, the official 9-second teaser gives very little away, merely showing a very spiky pirate galleon sailing the seas off the coast of a tropical island. However, the leaked footage spotted by Reddit showed a lot more. Like Assassin’s Creed IV: Black Flag, Skull and Bones is set during the Golden Age of Piracy. Players start off as rookie pirates with just a dhow in their possession but will eventually become the most notorious pirate in the Indian Ocean by growing their Infamy level and increasing their reputation.

Infamy can be gained in many ways, such as exploration, plundering, treasure hunts, and big world events. One of those shown in the video was contracts given by NPCs, which give plenty of rewards for success but will also carry penalties for those who fail. Contracts can be completed solely or by up to three players. Plundering merchant ships can also be quite profitable, but only if you get in close and personal. Ships can be taken out from a distance to minimize risk but this means cargo will be lost with the ship. Boarding the ship is the best way to reap the rewards.

While at sea, ship management is incredibly important. A ship’s health needs to be kept in good order with repair kits. Sinking will mean losing Infamy and players will have to respawn at the nearest den or outpost. Most of the cargo will be returned to you but the rest needs to be recovered from the wreck before other players get their hands on it. Crew morale is also vital as they need to be well-fed and watered to avert mutiny. You also need to avoid attention from other pirates or the NPC privateer hunter ships.

In between attempts at plundering the high seas, players can stop by at the pirate den of Sainte-Anne found on the Red Isle. This is where to prepare for each mission by making sure you have enough provisions like rations, water, repair kits, and ammunition. New ships can be built or upgraded to suit different playstyles and your pirate’s outfit can be customized at the atelier. Gathered resources like animal skins and harvested materials, can be refined into crafting resources to build stronger ships, weapons, and furniture from unlocked blueprints. It’s also here where players can socialize with others and pick up those aforementioned contracts.

While Ubisoft was quick to remove the leaked gameplay footage, an official video will hopefully be shown in the next Skull and Bones update. In other news, Sony has revealed the conversion rates for existing PS Plus and PS Now vouchers and they get worse as voucher duration increases. Elsewhere, Final Fantasy XVI is in the final stretch of development.

Gotham Knights Game Rating Leaves Out PS4 and Xbox One