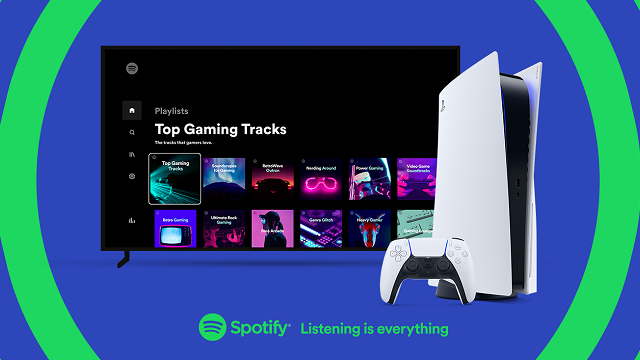 Spotify App Seems to be Getting a Native PS5 Version

Players who want to listen to Spotify on their PS5 console have to use the PS4 version of the app through backward compatibility at the moment, but it seems like that may soon change. A native PS5 version of the Spotify app has been randomly dropped onto the PlayStation Network backend.

When is Spotify coming to PS5?

No other information was included on the PlayStation Network page for the Spotify PS5 app that was spotted by PlayStation Game Size, so we don’t have a release date for the app, nor do we know its install size either. The native PS5 version is not surprising bearing in mind both the PS3 and PS4 consoles got their own version of Spotify back in 2015. Players are hoping the native version will include compatibility with 3D Audio when it is released.

Spotify is available through PlayStation in nearly 70 countries, although there’s no word on whether this availability will be expanded on the release of the PS5 app. The app offers more than 70 million songs and billions of playlists that can be played while players are in the middle of a game. A Spotify account is needed to make use of the app, although players can set this up for free. All Premium upgrade options also offer a 1-month trial of Spotify Premium to try out before committing to a subscription. Spotify Premium removes adverts from playback and allows players to skip as many songs as they like for $9.99 per month.

In other news, Rollerdrome’s trophy list suggests it may take skill, patience, and a little bit of luck to get the Platinum trophy. Elsewhere, Overwatch loot boxes will no longer be available after the Anniversary Remix Vol. 3 event, after which all unopened loot boxes attached to a player’s account will be automatically opened and rewards added to their inventory.