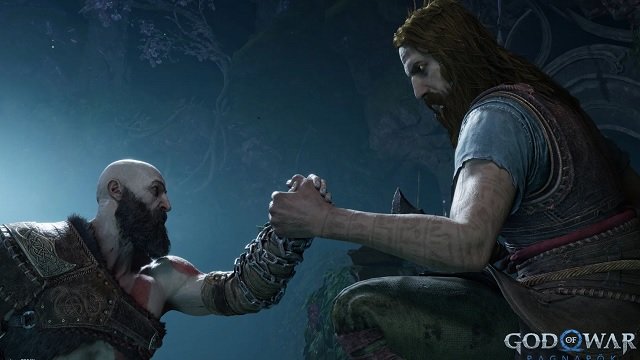 A stunning God of War Ragnarok story trailer was showcased at the tail end of the PlayStation State of Play, as teased by several Santa Monica Studio devs earlier today. The three-minute trailer reveals many details of the game’s story, so it does contain some minor spoilers that you may want to avoid. That said, one scene in particular seemingly shows how Ragnarok, the series of events that foretell the end of the Norse gods, happens in the first place.

How Atreus may be responsible for Ragnarok

Near the 2: 10 mark of the trailer, we see Kratos, Atreus, and a large wolf assumed to be Fenrir, who is traditionally bound to a rock until Ragnarok happens, all staring at an eclipse amidst a darkened red sky. Atreus fires an arrow at the blocked sun, causing magic to emerge from the ground, scorching the sky with a tear and forcing the sun to drop, revealing a regular sky with a moon in the background. Fenrir howls at the moon, while Kratos narrates about how these actions have been done because he does not wish to be bound by fate.

The rest of the story trailer sees “The God Killer” confront the Norse gods, opening with a shot of him cutting the braid off from Týr, the god of war in this pantheon. Kratos is asked whether he really wishes to start a war, is called a pretender god by a winged warrior named Hirst, and is derided by the gods who believe him to be a selfish killer who does know what it means to be a god who is worshipped and loved.

At the same time, Kratos is following the word of his son who he knows is keeping some sort of secret from him. This likely means that Atreus is the one who knows what needs to be done to bring about Ragnarok, though he struggles with his father’s lack of belief. We also see the appearance of Freya, who swore vengeance at Kratos for what he did in the first God of War, as she removes something that dangles from Atreus’ neck using her spear. We can only imagine that her anger will grow as the downfall of the gods accelerates by the hands of the pair.

In other news, a limited edition God of War Ragnarok PS5 controller will open for pre-orders later this month, and the release date for the loyalty program PlayStation Stars has been revealed.

Wo Long: Fallen Dynasty Will Be a Challenging...