The latest Gran Turismo 7 update added four new cars, three new track layouts, and two new Cafe menu books when it was released just before midnight PT yesterday. What we didn’t have at the time were the full patch notes, and they have revealed that as well as the new Gran Turismo 7 vehicles, car prices of the Hagerty Collection Legend collection have been increased. 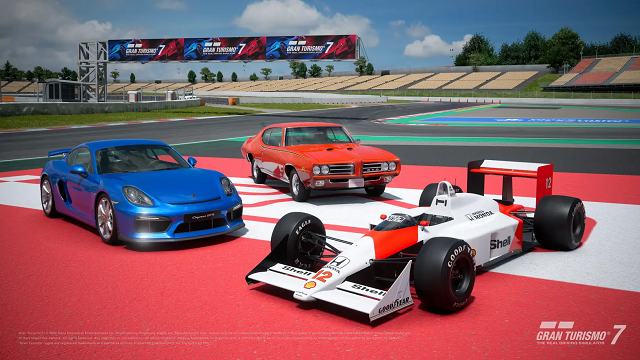 The Gran Turismo 7 August Update 1.20 patch notes also reveal that there have been new events added to World Circuits and another Scapes curation, as well as all of the gameplay improvements and bug fixes. Admittedly, players might not find the increased cost of the Hagerty car prices an improvement as such, but you can find the full list of all the changes to Gran Turismo 7 in the patch notes below:

The maximum number of cars that can be on track at Circuit de Barcelona-Catalunya Rallycross Layout is 16.

The new Menu Books and Extra Menus will appear after clearing Menu Book No. 39 (‘Championship: World GT Series’) and having watched the ending.

The ‘European Sunday Cup 500’ and ‘Porsche Cup’ will become available upon unlocking the ‘Circuit de Barcelona-Catalunya,’ while the ‘World Touring Cars 600’ and ‘World Rally Challenge’ will appear after clearing Menu Book No. 39 (‘Championship: World GT Series’) and having watched the ending.

6. Scapes
– The ‘Canadian Rockies’ location has been added as a featured Curation in Scapes.

Other Improvements and Adjustments

1. Physics Simulation Model
– Adjusted the suspension geometry;
– Adjusted the simulation for tyre heat generation and wear ratio. This adjustment makes it easier to see the remaining tread;
– Altered the simulation of the differential gear (with a Fully Customisable LSD). As a result, it’s now more effective when decelerating and provides a much smoother driving performance;
– Adjusted the Performance Points (PP) of some cars;
– Changed the conditions for mechanical damage occurring from a collision or contact if ‘Mechanical Damage’ is set to ‘Light’ or Heavy’ in the race settings.

2. Controllers
– Adjusted the performance of the wireless controller.

3. Sound
– Adjusted the sound effects so that it is easier to hear the difference in sound between Stage 1 to 3 of the ‘Weight Reduction’ modification.

Hagerty provides valuations and vehicle insurance for classic cars and has sponsored some historic car events in recent years.

New prices will be applied the next time a vehicle goes on sale. The next price revision is scheduled for November 2022.

5. Race Screen
– Fixed an issue wherein the ‘Weather Radar’ on the ‘Multi-Function Display’ would not function properly in event races with weather and time set.

6. Others
– Various other issues have been addressed.

In other news, The Dark Pictures Anthology has been unaffected by Nordisk’s acquisition of Supermassive Games. Elsewhere, analysts claim today’s PS5 price increase will not affect Sony’s sales.