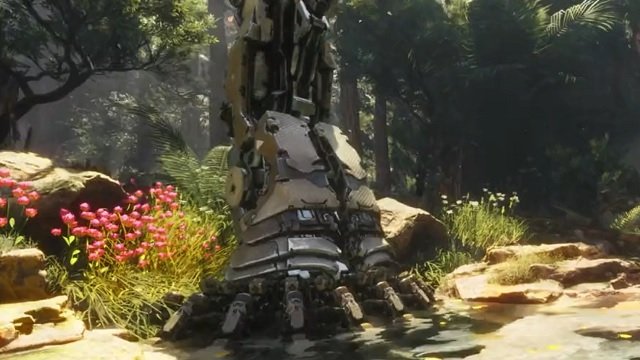 A quick, side-by-side Horizon Call of the Mountain comparison between the latest teaser and its first reveal in January already shows a vast improvement in graphics. This PSVR 2 project by Firesprite Games is looking primed for the upcoming State of Play presentation, scheduled to go live later today.

Horizon Call of the Mountain: Before and After

The difference between the first Horizon: Call of the Mountain reveal (left) and today’s video (right) is staggering #PSVR2 @yosp #gamecatARMY pic.twitter.com/9V6LEQM0nk

Firesprite Games released a teaser trailer on its official Twitter account yesterday, providing a first look at the PSVR 2 game before its very likely appearance in today’s State of Play. Comparing the shot of the Tallneck from this 20-second snippet to the original reveal trailer four months ago in January, the graphical improvements already look stunning. The amount of layered details of the mechanical foot, not to mention the lighting through the trees and foliage in the background, shows how much the initial trailer was really just a work in progress.

As revealed earlier when the reveal trailer arrived, Horizon Call of the Mountain is a joint project between Guerrilla Games and Firesprite Games. The game will have an original story featuring a new protagonist, though Aloy and other characters from the Horizon series will be making an appearance. Sony announced the project during the same panel at CES 2022 where it showed off the PSVR 2 headset, placing the game front and center as an example of what the headset and the new Sense controllers are capable of.

Hopefully, we’ll see much more from Horizon Call of the Mountain in the State of Play presentation, which is scheduled to last 30 minutes long and is expected to feature third-party games and multiple PSVR 2 titles. The presentation will go live at 3pm PDT / 6pm EDT / 11pm BST on YouTube and Twitch.

In other news, a full list of PS Plus Extra/Deluxe PS4 and PS5 games in Japan have been released, and an unannounced Destiny project is in development if a Bungie job listing can be believed.