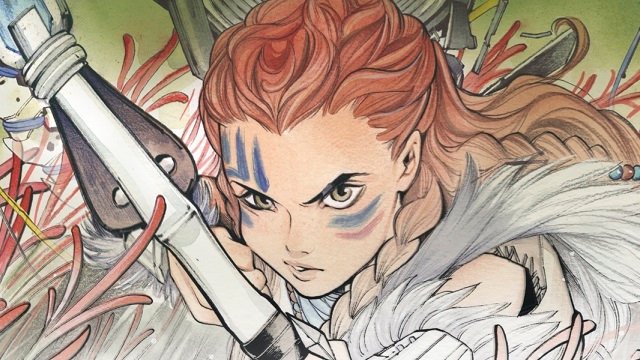 A new official Horizon Zero Dawn Coloring Book will be available for sale on July 19. Pre-orders are now live, and while the accompanying tweet from Guerrilla Games directs users to Amazon for US and Forbidden Planet for UK, there are many outlets providing pre-orders like Barnes & Noble, Walmart, and Target. Titan Comics revealed the coloring book, which compiles line art based on the Horizon Zero Dawn comic book series, in June.

Coming soon! The Official Horizon Zero Dawn Coloring Book from @comicstitan! Recreate and bring to life the world of Horizon in your own style. On sale July 19. Pre-order now!
US: https://t.co/EGixj2hjae
UK @forbiddenplanet: https://t.co/Vb2HY0UqZz pic.twitter.com/UgJdh4e0OW

The coloring book costs $14.99 and is a 80-page paperback, so there will be plenty of material to fill in. The book will feature line art from artists of the popular comic series based on the first chapter of the Horizon franchise including Ann Maulina, Harvey Tolibao, Peach Momoko, and Elmer Damaso. In addition to the two images embedded in Guerrilla’s tweet posted above, the Amazon listing includes four additional images in its gallery in case you want to inspect the overall quality of the art.

Titan Comics is known for having numerous collaborations with video game properties, including comics and graphic novels based on Bloodborne, Assassin’s Creed, and Life Is Strange. The studio will also be releasing the official Horizon Zero Dawn Peach Momoko Poster Portfolio on August 23 as well as the Life Is Strange: Coloring Book on September 13.

While the trend of adult coloring books was at its peak in 2015, they still have appeal for those who want to practice shading techniques or just find coloring therapeutic. Aside from appreciating the game art with a different lens, it’s a way to do something nostalgic and can be a part of a digital detox, away from the constant pings and notifications of social media.

In other news, PlayStation Studios’ cloud technology will likely improve now that its acquisition of Haven Deal is complete, and the Red Dead Redemption 2 PS5 port has been reportedly dropped.