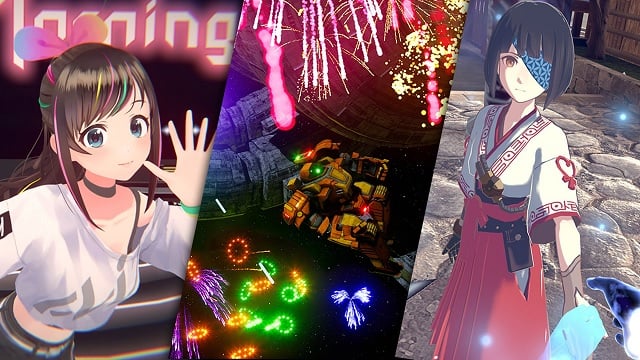 Fantavision 202x is one of five more games announced for the PSVR 2 launch games line-up. The five Japanese games cover a range of genres, including shooting, sword fighting, rhythm, and adventure. As well as the free Resident Evil Village PSVR 2 DLC, all are currently scheduled to be released alongside the headset on February 22, 2023.

A massive 22 years after its PS2 debut, the Fantavision franchise is getting a new title. The game combines action, shooting, strategy, and puzzles where players must catch three fireworks of the same color before detonating them. Chaining detonation combos together increases a player’s score. Players use Sense controllers to aim and shoot the fireworks, with haptic feedback enhancing the experience. A new replay mode will also let players watch the show from different angles.

Up to four players can team up to take on experimental killing machines in an AI-created virtual world called Altair. Armed with a seemingly underpowered sword and a shield, the good news is that you have aerial combos, AOE attacks, and special abilities to assist in the task as players aim to take down the ruling fully autonomous weapon Laws-Zero.

In this VR action-adventure game, the island of Onogoro is under threat from five giant Kami. Together with a shrine maiden named Hal, players are tasked with stopping them and taking down Arakida Masatake, the mastermind behind the lethal machines. To solve puzzles, players have the legendary Celestial Weapon that can manipulate objects and fire Ki, but other riddles can only be solved by Hal. Teamwork is invaluable.

The rhythm game uses Sense controllers to hit colored boxes in time to a performance by virtual YouTuber Kizuna AI. There will be 15 songs at launch with more to come as DLC, alongside new costumes and the singing-specific AI #kzn (Kizuna-chan). The game will also be available for the original PSVR as well as non-VR PS4 and PS5 versions.

Astrum Close is a maritime city with a crime rate of 0.001% because all crimes are prevented by “dreams”. However, when the city’s founder Professor Rumford is murdered, Special Supervisor Hal Scion has to find the killer in this VR investigation game. Memory Dive can let players relive memories and alter the present merely by touching objects, while the Augmented Dreaming world combines the real world with dreams. Lily, the navigator robot, is also on hand to help.

New Kojima Game Will Be Revealed in 2023