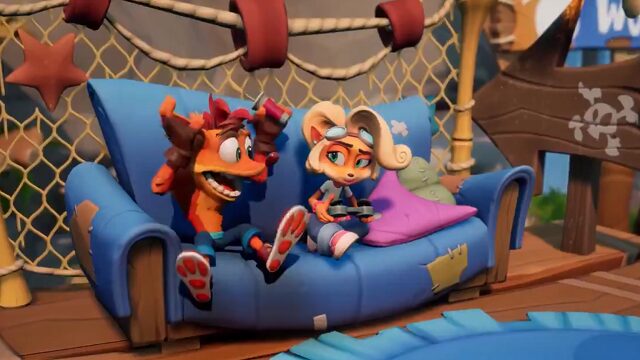 Back in 2020, there was a Crash Bandicoot Wumpa League game in development that was shelved for unknown reasons. Recent rumors claim that it has returned and is being rebooted. The new Crash Bandicoot multiplayer game is rumored to be more in the style of a 4v4 Crash Bash than the canceled Wumpa League idea and the current build has 10 playable characters that will include both familiar faces and those that are completely new.

Who is in the Crash Bandicoot multiplayer game?

Seen enough now to believe that the long rumoured Crash Bandicoot multiplayer project has been rebooted (after getting shelved in 2020), so I wanted to share some art from it. As you can see… many characters were planned. Details on gameplay in this thread: https://t.co/ap4qVy3WOI pic.twitter.com/zf1yXPujlw

The artwork seen above from the canceled Crash Bandicoot Wumpa League was shared by Twitter user Liam Robertson and includes a variety of characters both old and new. In a reply, Jez Corden replied the new Crash Bandicoot multiplayer game reportedly has a test build that includes ten characters at the moment, and “a bunch of these” were featured in that artwork. These include “the croc gunner dude” (Dingodile) and Ripper Roo.

Other familiar faces included in the artwork are Crash (of course!), Coco, Dr. Neo Cortex, Tawna, N.Gin, and Papu Papu, plus a plethora of new characters. We can assume Crash will be included but don’t know which of the others are in the new iteration of the game. Corden also said “some of the characters depicted above seem to be more like power-ups (think Ashe summoning Bob in Overwatch)”, but he wasn’t completely sure whether this was exactly how that gameplay mechanic would work. Of course, everything above is to be taken with a pinch of salt until Activision and the developer responsible make an announcement.

In other news, pre-orders of The Last of Us Part 1 Firefly Edition have apparently already sold out less than 24 hours after being announced. Elsewhere, the upcoming 10-minute long Final Fantasy VII 25th Anniversary Stream may include a look at Final Fantasy VII Remake Part 2.

The Last of Us Multiplayer Is All About Live Service