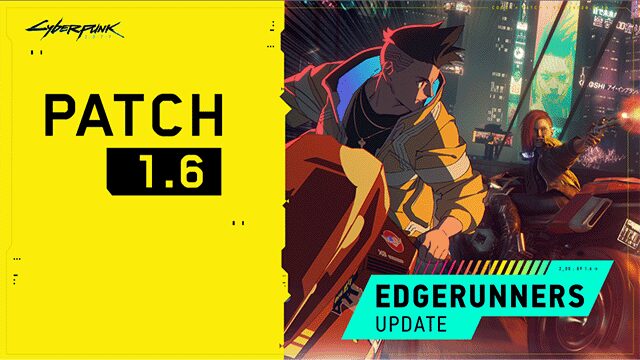 The Cyberpunk 2077 Edgerunners Update 1.6 patch notes are out, and it’s actually bringing some new content and not just bugfixes. It adds cosmetic slots for clothing which finally allows you to keep all the protection of the game’s best armor while keeping your signature look. CD Projekt Red has also added cross-progression to the game, which is great since the upcoming expansion won’t be coming to PS4 or Xbox One.

The Cyberpunk 2077 Edgerunners update brings a smattering of new content in addition to the usual bug fixes.

The most notable addition for many people is transmog (the ability to equip an outfit in a cosmetic slot), which will change your looks but not your stats. You can assemble up to six outfits via any wardrobe and switch between them in your inventory.

These new items have been added:

A new cross-progression system allows you to share the same save between multiple platforms. That’ll be great for those who played on last-gen consoles and want to continue when the current-gen-only DLC releases sometime next year.

To celebrate the upcoming premiere of the Cyberpunk: Edgerunners anime series, CD Projekt Red has hidden a few tie-in goodies throughout Night City. Unfortunately, the patch notes don’t list what they are but hint that it includes new equipment and new Photo Mode features.

Check out the official site for the rest of the Cyberpunk 2077 Update 1.6 patch notes.

In other news, PlayStation designer Masayasu Ito is retiring from Sony, and Randy Pitchford wants you to buy his old shirts for Charity.

Overwatch 2 Down Due to Ongoing DDoS Attacks,...