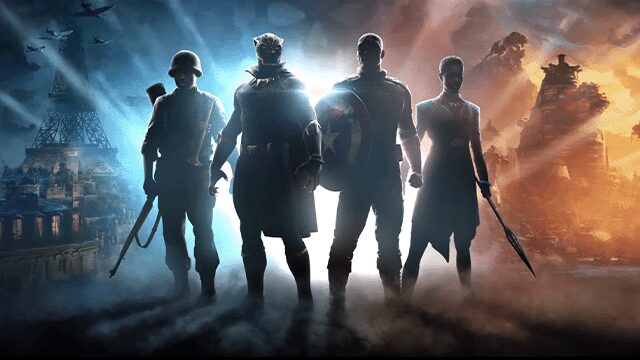 We learned a bit more about Amy Hennig’s upcoming Marvel game from Skydance News Media at today’s Disney & Marvel Game Showcase. While the title is still shrouded in secret, we at least got a hint at its setting. We also found out the playable character roster, and it seems like it’s going beyond just Captain America and Black Panther.

We had already heard rumors that the (still) untitled Skydance New Media Marvel game would feature Captain America (Steve Rogers) and Black Panther (Azzuri). It was also leaked that World War 2 would be the setting. All of that info was confirmed by today’s teaser trailer.

We also learned via PR that two more playable characters will be available:

While PR calls the game a “globe-trotting adventure,” we only know of one location so far. The trailer shows that we’ll likely visit occupied Paris at some point. That would mean the game takes place sometime between June 14, 1940 and August 25, 1944. It also seems like we’ll be taking on Hydra in some form or fashion.

We’re so grateful for all the enthusiasm and support we’ve received from fans, and we’re thrilled to finally unveil a first glimpse of the game during this year’s D23 Expo. Marvel has been an incredible partner throughout the creative process as we develop an original story and build an exciting new team of characters. We hope fans are intrigued by this sneak peek, and we’re excited to share more down the road.

In other news, Midnight Suns got a new release date, and Don’t Nod is developing a new action RPG.