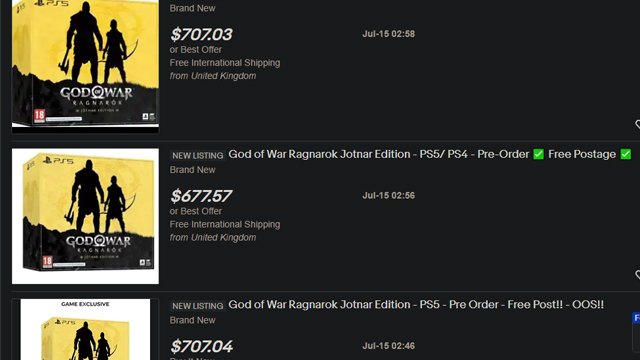 God of War Ragnarok scalpers have taken advantage of the recent pre-order rush to nab the highly sought-after Jotnar Edition of the game. This version includes a bunch of physical and digital goodies with an RRP of $259.99. For those who don’t manage to secure a pre-order and have to instead consider buying from a scalper on a site like Ebay, the current cost is more than double.

You only have to head over to Ebay to see scalpers selling God of War Ragnarok Jotnar Edition pre-orders for upwards of $700. This is obviously a huge mark-up on the RRP, with scalpers benefiting enormously from being one of the first to checkout with the coveted special edition.

In recent years, PS5 and Xbox Series X|S consoles, as well as PC graphics cards were common targets of scalping practices. While retailers did begin to recognize this and took steps to try and ward off scalpers, there’s only so much that can be done.

Unfortunately, it appears that many of the God of War Ragnarok Jotnar Edition purchases made today were immediately thrown up on Ebay. At the time of writing, there are 56 results for “God of War Ragnarok Jotnar.” This will be a kick in the teeth for those who were ready and waiting at their computers or phones and just didn’t get the luck of the draw when it came to “Adding to Basket” and successfully checking out.

Hopefully many of our readers and passionate God of War fans managed to secure their Jotnar Edition or Collector’s Edition pre-orders, perhaps with the help of our handy pre-order guide.

In other gaming news, PS5 generated the highest dollar sales in the US for the first half of 2022. Ubisoft reportedly has plans for an Assassin’ Creed Japan setting. Stray has joined with Travel Back for backpack, harness, and leash accessories.