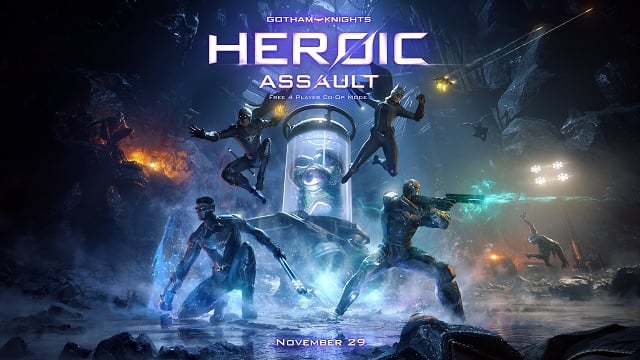 The latest Gotham Knights PS5 update has introduced the 4-player co-op Heroic Assault mode today, November 29, and the patch notes also explain how this isn’t the only addition to the game. There is also round 2 of Showdown mode and plenty of bug fixes and gameplay improvements to be found.

Heroic Assault is the main draw of today’s Gotham Knights update. The 4-player co-op mode has 30 floors of enemies to be conquered and those who succeed will be rewarded with new gear and transmogs. There’s also another round of Showdown mode introduced with the update where players have to face supercharged versions of infamous villains like Mr. Freeze, Harley Quinn, Clayface, and Talia al Ghul. While this launched at the same time as Heroic Assault, Showdown remains a one- or two-player mode.

Journey deep into Gotham’s underworld (literally) and discover the mystery awaiting at the bottom!

The villains are back for round 2! Square off against supercharged versions of the game’s main DC Super-Villains, including Mr. Freeze, Harley Quinn, Clayface and Talia al Ghul.

• Launched from the villains trophies in Belfry

• Enemy health has been lowered on hard difficulty

• Throwing enemies will do increased damage. Additionally, it will cause the enemy to be stunned

• Adjustment of CPL value, to make it more representative of the gear strength

• Increased the amount of Nth Metal awarded by Penguin

• Reduced Health of the Drone Master

• Fix for throwing Large Enemies into wall not causing damage

• Added a message when blueprints are automatically converted into salvage

• Fix for Talia getting stuck on a wall without evading

• Fix for Harley Quinn counter attacking when being stunned

• Added Intensity option for many of the Filters

• Added Look at Camera option (available when a Body Pose is applied). This option is replicated to other players

• Light Rigs are now replicated to other players

• Red Hood’s laces will no longer stand out