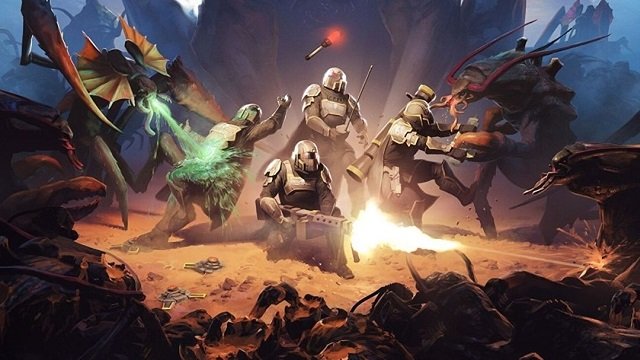 Rumors that Helldivers 2 may be revealed soon began yesterday after developer Arrowhead Game Studios released a TikTok short showing their social media person trying to deal with hundreds of messages about the game. These gathered pace today after ten seconds of gameplay purporting to be from Helldivers 2 appeared on Twitter before promptly being removed through a copyright strike.

When will Helldivers 2 be revealed with proper gameplay?

What is it like to do social media for a video game studio? Spend the morning with me and find out! 🤔😳 pic.twitter.com/lenZ40Cgpb

Helldivers 2 has not been officially announced although the above Tweet seemed to imply it would be making an appearance soon, especially as the few seconds of gameplay footage leaked by Twitter user Adam has since been removed “in response to a report from the copyright owner.” Helldivers 2 was also one of many games that was leaked during the GeForce Now internal database leak approximately a year ago, further lending credence to the rumors. Many are expecting the game to be announced this month at the rumored PlayStation Showcase. We do know the game is unlikely to be at Gamescom as PlayStation will not be attending Gamescom and Helldivers is a PlayStation-owned IP.

Arrowhead Game Studios announced they were working on a next-generation third-person cooperative game back in 2020, but nothing has been mentioned since. The game is still in development according to recent job listings at the studio, one of which requires the Senior Character Artist to focus on “everything from organic to hard surface characters such as creatures, humanoids and robots.” This hints that Helldivers 2 may take a different direction from the original game, which was an isometric, cooperative, twin-stick shooter. Neither Sony nor Arrowhead Game Studios has made a comment, but hopefully, we find out soon whether the rumors are true.

In other news, the next Marvel’s Avengers hero will be The Winter Soldier and he’ll appear sometime after September. Elsewhere, Elden Ring has managed to shift 16.6 million copies since its release four months ago.