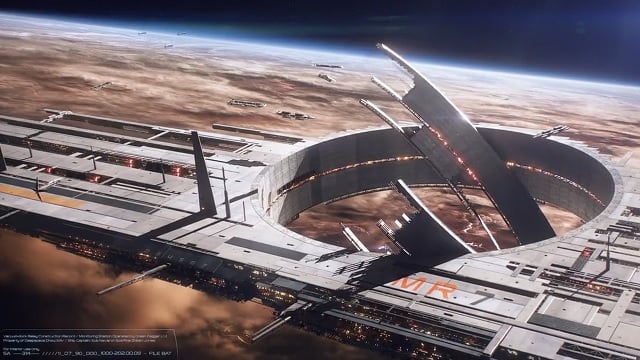 In celebration of N7 Day, BioWare has released a 25-second Mass Effect 4 teaser that specifically challenges users to use a microscope to investigate the footage more closely. At first glance, the looping GIF shows an image of a mass relay, given the “MR 7” label emblazoned along its surface, as it safely hovers over a large brown planet.

What does the mass relay mean in the ME4 teaser?

Happy #N7Day from across the stars! 💫 We found this interesting footage you may want to 🔍 a bit more closely.

This seeming confirmation of a mass relay coincides with the theory that Mass Effect 4 continues after the “destroy” ending from Mass Effect 3, as suggested by prior leaks of a deleted item description for Mass Effect 4 and the official announcement of the game. Moreover, the description in the lower left-hand corner reads the following:

For Internal Use Only

This would suggest that the mass relays are in the middle of being repaired (or is this a new mass relay built from scratch?), with this particular relay being captained by what sounds like a quarian. Zooming in more closely, the date below this description seems to indicate that the footage was recorded on “11_07_90” that translates to November 7 on a year that ends in “90.” If we assume that this means the year 2190, that would only be four years after the events of Mass Effect 3.

One point of concern is that the mass relay has the same white and yellow color scheme as Cerberus’s design. The footage also has these occasional clicking noises that might be reminiscent of a Geth.

What do you think about the teaser? Notice something we missed?