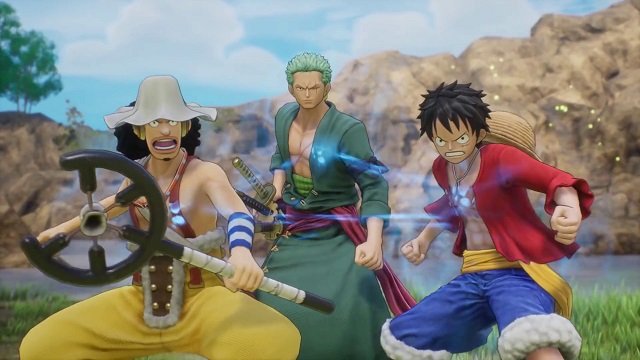 One Piece Odyssey is the latest game in the One Piece franchise to come to PS4 and PS5 later this year. The JRPG will have an original story that will introduce brand new characters created by Eiichiro Oda. The first of those characters was introduced in the announcement trailer that gives the first glimpse at the Straw Hats’ new adventure.

Who is the new character in One Piece Odyssey?

The new character in the trailer is the “cheerful” Adio, who’s quite a bit taller than most of the Straw Hats. He lives on the mysterious new island on which the pirates find themselves stranded after their ship is wrecked during a storm. The crew of nine includes Monkey D. Luffy, Roronoa Zoro, Nami, Franky, Sanji, Usopp, Nico Robin, TonyTony Chopper, and Brook, all of which are playable characters. They’ll need to defeat strange creatures and “massive” bosses in turn-based battles. Outside of the campaign, there will also be dungeons to explore, side quests and other activities like puzzles to solve; all of these will be introduced to players at a later date.

One Piece is celebrating its 25th anniversary this year, and the team at ILCA Inc. has been collaborating with Eiichiro Oda to create a game that stays rooted in the franchise canon. The characters will be voiced by the original Japanese voice-over actors and the game’s producer Katsuaki Tsuzuki hopes they will “surpass players expectations” when One Piece Odyssey is released later in 2022 on PS5 and PS4.

In other news, players looking to grab the Lego Star Wars: The Skywalker Saga Platinum trophy need to prepare themselves for a collectathon. As well as completing all of the story, players need to find bricks, studs, Minikits, datacards, and characters. Elsewhere, the PS5 DualSense controller has won the BAFTA Best Controller Ever Tournament, beating out competition from the DualShock 2, Xbox Elite controller, and Nintendo Joy-Cons.